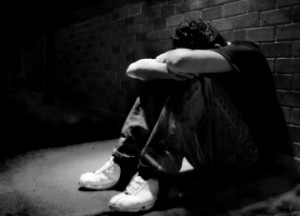 It's nice to see a mental health condition being treated for what it is:

Depression is very real, as any current or former sufferer will tell you.  The symptoms are unfortunately damaging to one's social circles, close relationships, and employment positions.  Perhaps this damage is more rooted in our insatiable need to punish, correct, discipline, or exile those who make seemingly bad social choices.  Ditto for those with addictions-- rather than see the reality of the circumstances that led to the illness, it is much easier to sit back, play armchair jury, and sentence the "wrongdoer" to whatever consequences we see will fit in the moment.  Not a lot of thought goes into this process usually.  Once the depressed or ill person has been labelled a "jerk" or "lazy," the job of punishing them is met with little resistance from any party.  It's so nice to see at least one depressed woman stand up and say "No! I am ill, not some mean, useless, or malicious person."  It's even nicer to see the courts respect that position and rule in her favour.

There is a powerful analogy I read somewhere, I wish I could remember the source, but the gist of it is as follows:

Think of the best friend you have, a person you greatly respect the opinion of, and in whom you would place a good deal of trust.  Once you have the friend in mind, consider the image of them screaming and cursing at you out a window as you're walking down the street.  Imagine they are upset about a disagreement you had with them over something insignificant.  Imagine your feelings in this scenario... do you feel hurt? Angry? What do you want to do?  Perhaps write down your thoughts and feelings, and erase the image.
Now replace it with an image of the same friend saying the same things for the same reasons under a different context.  In this second scenario, imagine the window that your friend is screaming from is at a residential mental health facility, where he/she has been placed for acute depression.  What are your feelings now?  Are they different? How might you react now?


This awareness-raising exercise should demonstrate clearly how you can feel and react to situations with different levels of understanding.  I take a flexible attitude to work with me every day, because I have seen over and over that even the most malicious-looking person has a deeper story if I care to investigate.  It takes more patience and dilligence, but in the end, understanding reality for what it is pays off.
Posted by Derek M Book at 1:15 AM