In non-violent communication training, we are taught to look at the underlying need in a conflict. Sometimes, people need respect, or to be heard. Sometimes they have a tangible need (food, money, etc). Other times they just want to be left alone. The main point of clear communication is to seek the basic need, and address it if possible.

Of course, if you have ever watched a verbal conflict unfold, you would rarely see two humans listening to each others' innermost needs and doing what they can to accommodate. You are way more likely to see two or more people swirling around unnecessary details, pointing blame and demanding terms. Often, this leads to a "compromise," where a system is developed to replicate justice.

For example: two roomates clash over the dishes not being done. They yell at each other for a while, roomate "A" feeling like he is being taken for granted (he does most of the cleaning), and roomate "B" feeling pushed into a corner (she does not want to do the dishes 3 times per day). After some time, they come up with a "chore check list" for everybody in the house (including roomate "C" and roomate "D," who were not even part of the discussion). Lets say for the sake of argument that they never address the underlying needs expressed in the orginal conflict; Roomate "A" still feels unheard and disrespected, because he wanted some gratitude for the vacuuming he has been doing for months, etc.

This house now has a set of chore rules for no apparent reason. The underlying need has not been fully addressed, and the issue is likely to come up again. Perhaps another set of rules will be developed, or the rules will be modified. More conflict leads to more complexity...

Despite this being a fictional conflict, I believe that this sort of stuff happens in real life all the time. So many laws and policies and rules that are based on neglected needs that never got addressed anyway. How many intake procedures, admission criteria, and eviction policies are based on silly little conflicts that never got resolved? Is it really fair to subject the most vulnerable homeless people to endless red tape because so and so at the intake desk didn't feel like her job was important enough?

If you work with the homeless, take a close look at your policies-- are they all necessary? Remember that these folks are having a hard enough time trying to stay alive... they don't need the extra burden of complexity. We need resources that are instantaneous, light on conditions, and for gods' sake, simple to access.
Posted by Derek M Book at 4:01 PM No comments: 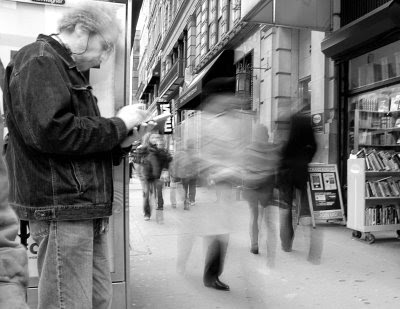 I am still working to get people off the street, and I have been recently blessed with a position that allows me to help more directly. For the last year, I have been a type of outreach worker/case manager for homeless and addicted people. I have taken people to detox, supervised visits with clients' children, taken people to the gym to work out, visited landlords, assisted with applications, and whatever else. It's a very effective method because my help can be custom-tailored to each client. Every person I work with has different specific needs, and the systematic approach will not work very well for those who are "slipping through the cracks." Only when you take a client to fill out a rental application do you realize that the person is illiterate, or terrified of elevators, or something else. There is no quick and easy fix to homelessness, because each homeless person is a complex riddle that can only be unravelled through patient trustbuilding and loads of one-on-one time.
There are still some general themes and similar problems that many street people share, such as a history of trauma, or addiction. How each person copes or does not cope with these issues, however, can only be discovered through understanding the whole person on an individual level.
I am happier in this job than I have ever been, despite the difficulty. I am impressed that society is finally starting to understand the human component to addressing homelessness. This is not a problem that can be medicated away, or ignored. We are starting to learn that simply connecting with those who are lost is a solution in itself.
Now if we could just get funding for trauma counselling... hmmm....
Posted by Derek M Book at 12:08 PM No comments: