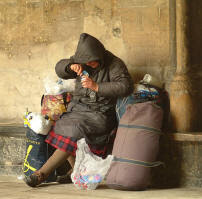 Looks like the BC Liberals are trying to create a new law which will allow police to force homeless people into shelters during bad weather events:

It's obvious that this law is in response to a death that happened last year, when a mentally ill woman died from lighting a fire in a makeshift shelter.
It's tragic, the things that happen to people on the street. When someone needlessly dies, one can't help but wonder if there is another way. Certainly those of us who work with the homeless at times wish we could force people into better situations. I sometimes joke with my addicted clients that I'm going to have them randomly kidnapped and taken to a treatment center in the boonies if they don't smarten up. Often, they laugh back "Go ahead, do it!" and part of me knows that they half-mean it.
The reality is, we can't solve these issues with legislation because the problems of addiction, homelessness, and mental illness (and the mixture thereof) are impossibly complicated. I will say it again as I have said many times in this blog: systematic solutions are likely to systematically oppress this population, or at least a large chunk of them. Some people have warned that homeless people will now be hiding during extreme weather so they won't be "arrested" and taken to a shelter. Because they will be hiding, more of them will die of exposure, which defeats and confounds the original intent of the law.
Logistically, this law is a nightmare. Cops will be trying to be social workers, and social workers will be trying to be cops, and the trust between shelter workers and homeless will be strained, if not destroyed. It is also a very pricey option. Want to save money? Try giving a $5 gift certificate to each homeless person who comes into shelters on a cold night-- it's a lot cheaper than using two police officers, a very expensive police car, and other community resources like the ambulance you are gonna need when George takes a swing at the cop who is arresting him for nothing.
Want to save lives and help people who seem lost? Build relationships with them, and address the real issue. Give people universal access to therapy, not seroquel, and you will see the death rate drop. Fund outreach workers, and organizations who care, and you will see the turnaround. Don't throw a desperate law at the situation, it will only add to the problem. Here is a list of better things to spend money on:
- New residential addiction treatment centers with spaces for concurrent clients
- More Shelter Beds
- More outreach workers in the province
- Targeted supportive housing for a range of issues (i.e. supportive housing arrangements for people with personality disorders)
- Funded therapy for people who have been sexually, mentally, and physically abused (Psychological therapy, not volunteer-based "emotional support")
- More school counsellors
- Training for people who currently work with homeless (Such as Motivational Interviewing skills, etc)
The list goes on. This proposed law is well-intentioned, but it lacks on-the-ground understanding, and the money could be better spent dealing with the real issues behind homelessness. In any case, police already have the option to detain someone who is self-harming, they simply do not enforce it in every case because of scare resources. I guess the positive outcome of this latest news is that it will remind people of the impact of extreme weather on the homeless.