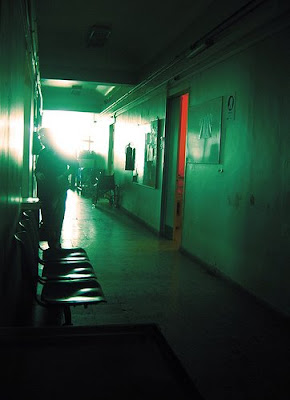 Homeless people report being treated badly at hospitals all the time, almost as frequently as they report being treated badly by police. I've heard stories that blow my mind, where a near-death addict is being told they "made their own bed" by an emergency room nurse, or where a clearly suicidal person is discharged because they are "disruptive." It appears that the homeless population doesn't fit so well into the medical model of care, yet doctors, nurses, hospital clerks, ambulance attendants and other health care professionals are forced into social work roles.

I'm going to carelessly throw out some generalizations about the medical model: It is hierarchical, systematic, logical, and as such it requires compliance. We've all watched the TV medical dramas where a doctor or nurse is threatened by a "chief of staff" for not following the chain of command to the letter. I think we romanticize the military mentality in health care, envisioning tough-as-nails doctors rigorously sacrificing self and coworkers to uphold the scientific method for the better good of all patients. We try to create a system of experts, where every hospital has a "Dr House," who lovingly bestows genius on his ignorant, lying patients.

Here in BC we have health "authorities," who decide what services will be provided, in which way, and how the public relations will be handled. This is not an elected system, it is a mild form of dictatorship that exists within our democracy (interesting thought, that...). There is a "chief" who decides the fate of us all, and numerous, powerful committees who set health policy. They decide who will get case mangement ("Schizophrenics and Bipolars only, please"). They establish admission criteria ("must not have an addiction, and must be compliant with medication"). They decide which non-profit organizations will get operational funding, and then they hand-pick the clients that the non-profits will be allowed to work with. Health authorities do this all with an iron fist, stating that because the issues are "life and death," we should all get in line and do as we are told. The threat is always that lives will be lost unless the medically-trained personnel are given a blank cheque and general omnipotence.

I could go on and on about this stuff, but I should get to my point: Homeless people don't give a rats-ass what your medical credentials are. A lot of street people catch a whiff of authority, and go straight for the jugular vein, because many have been abused by authority figures. Does it really make sense to have "compliance" as an admission criteria for a population that is generally defined by (and draws its strength from) non-compliance? Homeless people fight because that's how they have survived until now. Do you expect them to abandon this inner-strength because your "team" needs order?

And that's merely a quick criticism of the medical hierarchy. Let's consider the systematic components of our health care structure. We live in a world of triage flowcharts and prioritized waitlists based on expected human behavior. If this then that, unless A does not equal B, in which case implement C. Of course, if policy makers could spend some time at the homeless shelters or drop-in centres, they would quickly meet people who do NOT fit any category. Here we find the brain-injured crack addict with a personality disorder who just slashed her neck open-- you won't find a place on the flowchart for that! Here we find the overdose victim who refuses medical treatment (hey, lets look on the flowchart...hmmm... patient refuses treatment, therefore medical personnel remove services...sound ok?). I won't even begin to tell you some of the ridiculous catch 22 situations that my clients have been stuck in, because it may single out certain health care services or staff. I will simply say that the current health care approach is lacking flexibility and understanding.

I do want to say at this point that most health care staff are awesome, as are most policy makers. People do not get into health care because they hate people. Yet somehow, we have missed the mark. The medical model is an ineffective way to address the social issues of homelessness, addiction, and mental health. I appreciate the intent and the hard work of health care staff, but I like the bulk of care to come from the community, via properly funded non-profit organizations.
Posted by Derek M Book at 3:21 PM No comments: